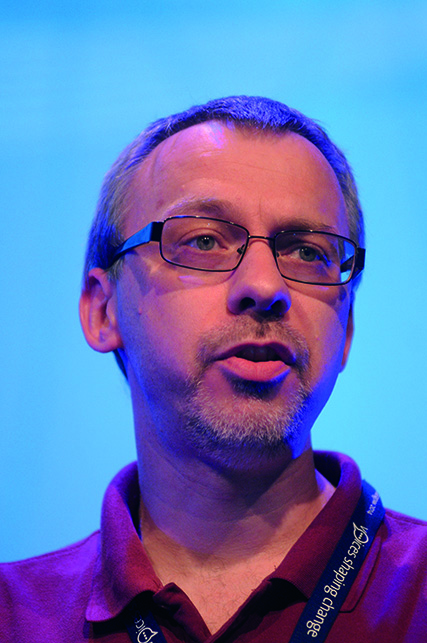 I have found that as I got involved, there were more and more jobs I would like to get involved with, and then you seem to collect union roles.

I manage a team of security professionals looking after BT Voice products.

I have been in Prospect since I was promoted to a management grade in 1994. So that is 21 years.

Why did you first become a rep?

I went to my first branch meeting in 1994, as I wanted to find out what the union did and how it worked. I walked out branch chair for what is now BT Suffolk branch. I was told it was either that or branch secretary…

My most ‘famous’ case was that of Graham Vare who took BT to an employment tribunal and won. I supported him right from his first formal performance interview, though a long period of stress-related sickness and his return to BT and his eventual dismissal and the ET.

I have also done a few unusual cases, the most notable being one that involved the discharge of an air pistol on BT premises!

The most recent case was a surprise DN (Development Needed) – which won’t be a big surprise for BT members.

How many grievance and disciplinary cases have you dealt with in the last year?

Not as many as you would think, probably three or four over the last year. Disciplinary cases are rare (for me at least), and grievances tend to be part of a larger case, generally involving mistakes in a BT process that has impacted a member – either performance management or my last one was around a promotion issue.

If you averaged it out then it tends to be one every couple of weeks or so. Obviously there are peaks around things like performance review time or if there is a strategic location move.

Absolutely do it. The union is built of the people in it, and grew out of a need to protect those people from being exploited. I often hear things like “the union hasn’t done anything on such and such”. Sorry, but you are the union. If you don’t like it, get in there and help change it!

From a personal standpoint, case handling has been the most rewarding thing I have ever done, related to my working life.

Oh that is a tough one! There are so many things that could make a difference to people. But I will plump for a legal set of standards about reasonable travel distance/time, which would be a great help. We have guidelines in BT about moving people’s work locations. But managers seem to think that if they are willing to travel two hours to work, everyone else should. Other people don’t even have that protection, so a legal framework would be an immense help.