Dawn has worked as a traffic officer (HATO) with the Highways Agency (HA) since 2006. HATOs were piloted in 2004 in the West Midlands after 'Black Thursday' in 2003 when heavy snowfall caused chaos and overburdened the capacity of the police force; the nationwide roll out of traffic officers was completed in July 2006. 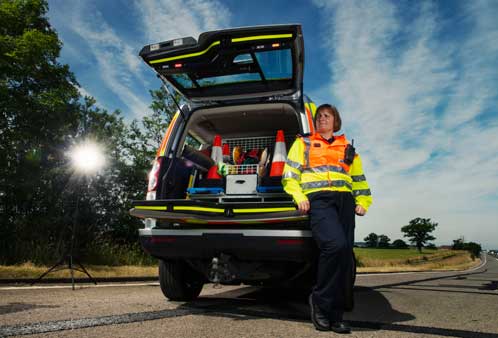 Although I sometimes feel like I am in the minority in this job, it is important to have a good rapport with the people you work with. In my experience there are those who accept you as an equal and those who get protective because you are a female.

“I like motorways. I used to work in helicopter maintenance which took me on a 21 mile daily motorway commute where I’d see police traffic officers attending incidents and I thought ‘What a great job’, so when I saw an advert for the HA I knew I had to apply.

“Out of 18 people on my course, I was the only woman. The others told me afterwards that they didn’t expect me to last more than two weeks, they thought I would feel out of place and uncomfortable. There was a high drop-out rate among women who began the training. You are away all week and it can be hard on family life; some of the men can be very macho. I didn’t experience any of this myself - the people I trained with were very accepting of me - but I had heard of some women who dropped out for this very reason.

“I work 8-hour day and night shifts, 6 days on, 3 days off. Our outstation covers a section of the motorway about 69 miles long.  We are always crewed in pairs and I normally work with a man because out of 31 staff there are only 3 women. This job is considered high risk. The biggest danger is from fast moving traffic, especially at night, but dealing with the public is a very challenging part of the job. You are there to help them and they can make life difficult, but I really love my job: every day is different and if just one person says thank you, it can make your day.

“On average we are called out 2-3 times a day, most commonly to attend breakdowns or debris in the carriageway. In an emergency situation we are automatically called out to support the emergency services but we are not supposed to be the first on the scene: our primary role is to manage the motorway traffic safely around the scene of the accident.

“However, I have had to deal with some traumatic situations. After attending my first fatality I went on a ‘trauma diffusion’ training course. This training is now being rolled out among all traffic officers.

“Although I sometimes feel like I am in the minority in this job, I think it is important to have a good rapport with the people you work with. In my experience there are those who accept you as an equal and those who get protective because you are a female.

“Most people will automatically talk to my male counterpart, especially if they have a mechanical question. Religion and culture also play a part in the way a woman in this job is perceived. You often find that men don’t want to take advice from a woman, even though I have received the same training and am equally equipped to manage the situation.

“There have been times where women we are attending are more comfortable talking to me. If you could have an equal male/female crew all the time I think you would have an ideal situation.  Once when I was crewed with another woman, we were called out to two breakdowns involving men; one asked ‘Is this allowed?’ and another said ‘It’s my lucky day’ so we deal with a lot of different reactions.

“I was brought up to believe I was no different to anybody else and if a man can do it, so can I. I think this outlook has a lot to do with your upbringing – my daughter is an electrician. I believe the main reason there are so few women in this job is due to shift work and the difficulty of fitting it in around family life. If part-time work was available we would see a lot more women coming in. 9 times out of 10 you will see a double male crew on the motorway, and that becomes the perceived normality.

“A lot of women don’t like blood and gore and that’s how they see this job. It is a reality but not a predominant feature, and is something that both men and women struggle with. It is important to understand that what you are dealing with is very unnatural and what you are feeling is very natural.”

According to the Highways Agency 15% of traffic officers in the UK are female.